I believe it appropriate at the nascent stage of my blogging experiment to set the stage before diving right in to vitriolic grandstanding with an homage to the art of thinking and to one of the greatest minds of the literary world, William Golding.  Golding is probably best known for “The Lord of the Flies”, something many of us are familiar with through assigned high school or freshman English Lit in college.  Or The Simpsons.  Either way, still works.  But as far as written works of art, what I personally feel most resonates with me and did actually change my life in a not so small way was his short, funny and and wholly provocative short essay, “Thinking As a Hobby”.  Between that and Jonathan Swift’s “A Modest Proposal” I think you could trudge and fudge your way through most intellectual cocktail tête-à-tête’s and come off not too shabbily.  If you haven’t read “Thinking” yet, do so now.  It’s a short read and you’re gonna need it to really appreciate this blog:  Thinking As a Hobby

I must admit that while I was fairly smart in school I didn’t really know how to use my smarts or appreciate it.  Also, I didn’t really grasp how smart I actually wasn’t until I left my domain and visited our yankee brethren for a couple of years.  I know plenty of smart people, brilliant even, who don’t fully realize the potential they have because they have never challenged themselves, not really.  I mean, challenge their thought, their comfort zone, their belief system, the core of themselves.  This had never occurred to me, like most, because I never had anyone to really push it out of me.   The South isn’t known for straying out of comfort zones and embracing the strange.  And as far as challenging beliefs, marrying old world Greek ideals with Southern pride, well, good luck getting a mea culpa out of that thistle patch of tradition.

I remember reading Golden’s take on religion and feeling that twinge of unease that pokes at you when you’re being forced to face something you’ve only taken on faith.  Faith in an of itself is so tenuous, so whisper-thin, it doesn’t take much to upset it.  It’s for that reason that so many protect it so violently.  Like the “Wizard of Oz”, the trick is trying really hard to keep you from peeking behind that oh so obvious curtain.  Whether it’s traditional belief such as religion, or familial customs such as established protocol or faith built on trust and little else other than it was the first thing you heard, it doesn’t sit well to hear that faith challenged.  But if you can force yourself that simple discomfort, then you truly can embrace the art of learning and embrace true knowledge.  That all stems from learning how to think.   Not just learning but enjoying it.

I enjoy thinking.  I honestly do.  I had done so long before reading Golding’s essay, but after reading it, it gave me focus and a goal.  Golding gives three grade levels of thought:  three, two and one, with one being the highest form of thought.  I wanted to be a one.  I began to question traditionally accepted mores and mannerisms and challenge them.  Not just within myself but with others.   Things that never sat well with me in my faith began to reveal themselves for what they truly were:  archaic explanations for the inexplicable.  A combination of fable and cautionary tale mixed with the awe and wonder and fears of a people ill equipped to understand the workings of the world and nature otherwise simply because they hadn’t had a chance to get there yet.  Now we’ve had that time and we’ve got the tools.  While today not everybody gets the same advantages, information and knowledge is at an historical all-time high as far as availability and advancement.   Still, I have never seen an assault on knowledge, science and intellect as blatantly aggressive, unnecessary and horrifying as now.   This assault on logic borders on the gothic and medieval, a sorrowful time of intellectual squalor and byzantine worship of magic and the magical.

When I got the chance to go to college, I took advantage of my collegiate undergraduate years to test myself in as many disciplines as I could, within the framework of a Biology Major with a Chemistry Minor and only so many electives outside of what I needed to get into vet school.  I took courses in Philosophy, Religion, Music, History of the Middle East, Angling, Karate…As many as I could.  I took electives within my discipline that I thought would best round me out academically rather than what would boost my GPA:  Biochemistry, Mammalogy, Advanced Genetics, Embryology.  I didn’t need any of these things to get into vet school and there were easier courses, but it wasn’t what I wanted.  I paid my tuition by God and I’d get my damn education, GPA and dean’s list be damned.

It paid off.  When I started at Auburn a fragile freshmen, joining the BSU (Baptist Student Union) and fighting hard to pray and witness like a good Billy Graham style born-again Christian, I found it harder and harder to justify something that more and more began to reveal itself for the charlatan it really was.  True, while the words and the poetry continued to hold sway and there was much comfort in the texts of the books of the New Testament, the mythology of it became more evident versus the history it has been purported to be.

I remember during my late Freshman year, right as I was really starting to war with myself and my faith, fighting SOOOO hard to keep on the “path of righteousness” encountering a street preacher who took to proselytizing on the commons.  He’d be out there every day around noon, during the heat of student movement and transition from class to class, building to building, preaching the words I had grown up with.  To me, it was a taste of home and as welcoming as a honeysuckle breeze.  I would stand for a while with others gathered around this guy while he bellowed sin and damnation, listening intently and watching the crowd.  Many weren’t having it.  They’d challenge him openly, some more harshly, some just for fun.  Some defending him.  It was stark and sobering for poor little old country boy me.

I listened to it all.  This went on for days.  I’d never seen people challenge my faith so openly.  I was a little uneasy about it but it was intriguing and even admiring.  The students’ comebacks were smart, most were funny.  And they were thought-provoking to a squeaky-clean Boy Scout Baptist who’d never known a life outside a Christian faith.  I found myself harkening back to Golding’s essay and his humorous yet realistic take on religion.   Why was I clinging so hard to this world of faith when the evidence was ever-mounting against it?  I’m a biology major for God’s sake.  Was I a scientist or not?  Golding had a girl to impress.  What the hell was my excuse?

I sat in my Biology professor’s office later for a preassigned meeting that afternoon, coming from one of the more lively encounters with the preacher and the students.  I found myself at a crossroads of ideas.  Here I was discussing the evolution of life, having been able to accept both the scientific and the Christian aspects evenly before, now realizing they weren’t such good bed fellows.  Trying to cling to my beliefs, I half-heartedly engaged with my professor, a brilliant and amicable professor, Dr. Robert Lishak.  He pulled his punches.  His office visitor, another professor, didn’t.  That guy scared me.  But in a good way.

When I left that office, the visit and the discussions about religion and science, the street preacher, my visit that weekend and the trip to church that Sunday…I realized I was fighting with myself.  I was needlessly warring with myself because I didn’t want to let go of something that I embraced simply because of the comfort it gave and not for any other reason.  Comfort was not truth.  Truth doesn’t have to be cold and harsh, but often it is.  I decided to let go of my faith, well the mythology of it anyway.  I’d cling to the life lessons, the beauty and the teachings.  The life of Christ is one worth living.  But when it came to thinking, I’d have to move from Golding’s grade three thinker to a grade two.

America is solidly, proudly, still grade three in thought.  If Golding had assigned a grade four, we’d probably be that.  A level in which not only ARE you at the least progressed in the pursuit of intellect but actually revel in it, all the while demonizing those that dare to push for more out of themselves.  It is this way of thinking, or not thinking, that will be the impetus for this blog.  I will rage against it as vehemently as Dylan Thomas did against death and chase it with the feverish insanity as Captain Ahab did with Moby Dick, quite possibly with the same metaphorical result.

I’m not a grade one thinker.  I never will be.  I’ve accepted this, but it’s not really a huge leap to realize that.  I’m never going to play the 3rd movement in the Summer Concerto of Vivaldi’s “Four Seasons” and blow y’alls dumb cracker minds ever either.  It’s just not something I’m going to be able to do, no matter how hard I train and how much I learn.  But I’m okay with that.  I’m happy enough to know that others will bear that torch.  My country may be satisfied with its wallowing at grade three.  But there’s a grade one world full of Elon Musks, Neil deGrasse Tysons, Patton Oswalts, Marilyn vos Savants and Stephen Hawkings out there.  Damn if I won’t stop trying to crash that party. 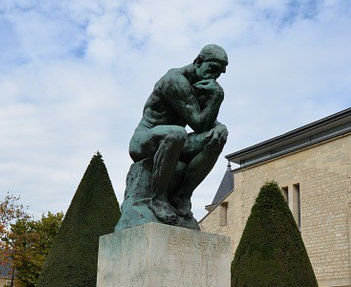 4 thoughts on “Thinking As a Hobby, Revisited”